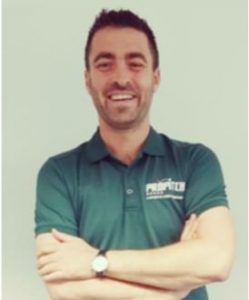 Ian has 20 years experience in the sports turf industry. He began his career in sports turf as an apprentice greenkeeper at Loch Lomond Golf Club where he went on to achieve a level 3 qualification, furthering his career to become Course manager at two golf clubs in Norway. To add to his practical skills Ian gained an honours degree in Turfgrass Science and winning the Martyn Jones Award on his graduation in 2006. Ian is also a member of the BASIS professional register.

Ian joined STRI in 2014 and spent 4 1/2 years working as a Turfgrass Agronomist and Project Manager. During this time, he consulted on golf courses and sports fields in the UK, Europe, South America, Africa and Asia. His notable clients have included FIFA (World Cups in 2014 & 2018), CAF (AFCON 2015 & 2017) and the R&A (Open Championship 2015 & 2016) and has delivered training workshops to greenkeepers and groundstaff in the UK, Europe, Africa and Asia. He has extensive experience in managing both warm and cool season grasses and has particular expertise in extreme cold climate having managed turf through winter months in Norway, Russia and Mongolia.